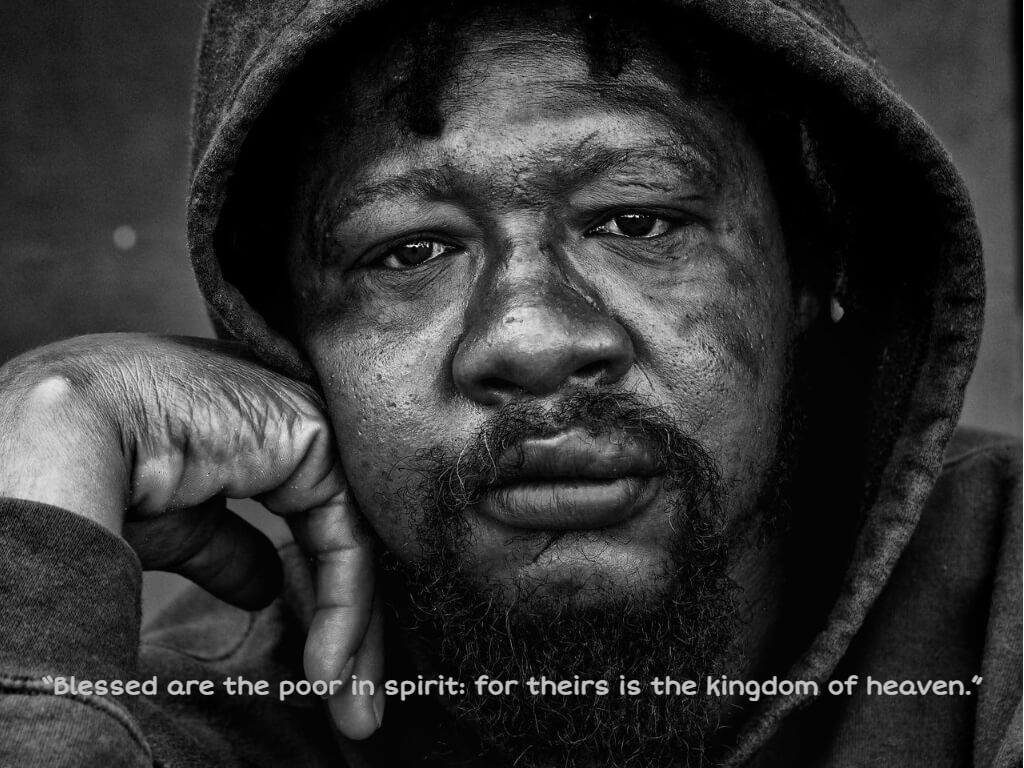 The Poor in Spirit They are the Blessed of God

“Blessed are the poor in spirit: for theirs is the kingdom of heaven.” (Matthew 5:3)

Who are the poor in spirit? It is the mourners, the meek, those who hunger and thirst, yes, these are the poor in spirit. They see themselves as bankrupt spiritually. They have no righteousness of their own. Humble not by choice but humbled by those who seek to control and rule their lives. Before they came to faith IN CHRIST, they cowered away from the God of heaven. But now, they keep their gaze upon HIM who loved them and gave HIMSELF for them. As a result, they are crushed by the enemy. But was it not the Lord Jesus Christ who first suffered for HIS own? Was HE not rejected of men? Was it not Christ who they spit upon. HE gave HIS back to receive the flogging of the soldiers. The straps used in the scourging had sharp pieces of metal seated in the leather to tear at the flesh. He was made ready for the crucifixion and mocked by HIS persecutors. HE was led as a lamb to the slaughter. Do you identify with the Son of God? Consider the story of persecution in Pakistan.

A Pakistani Christian woman was sentenced to death by hanging. Her crime she was accused by Muslims of blaspheming the prophet Mohammed. While at work, this Christian woman drank from a public fountain and was chastised by Muslim co-workers for they considered her to be unclean. They then accused her of committing blasphemy in their back and forth argumentations. She was sentenced and held in Pakistan as a prisoner for more than 9 years. Her case was finally overturned for lack of evidence, and she was released. (2019) There is now a precedent in Pakistan for the overturning of a death sentence of one accused of blasphemy which is important in the legal world of this time and place. (Source Wikipedia)

As we read the bible, we see the trials and tribulations of the early church which included examples of persecution. Stephen was stoned. The apostles were thrown into prison and rejoiced that they were counted worthy to suffer affliction for preaching and teaching in the name of Jesus Christ. Paul was imprisoned and suffered beatings for his faith in Christ. And what of our Savior, do we not see HIS sufferings, HIS sacrifice as the pathway to blessing for the humble, the impoverished, the persecuted.

“Let all those that seek thee rejoice and be glad in thee: let such as love thy salvation say continually, The LORD be magnified.  17 But I am poor and needy; yet the Lord thinketh upon me: thou art my help and my deliverer; make no tarrying, O my God.” (Psalms 40:16-17)

Are you poor and persecuted? Is the enemy staring you down? Imprisoned, chained, tortured, and tormented, these are your daily provisions from the hands of the enemies of God. “; yet the Lord thinketh upon me:…” He stores your tears in HIS bottle, your prayers are kept in golden vials, HE has plans for those who are persecuted.

“And when he had taken the book, the four beasts and four and twenty elders fell down before the Lamb, having every one of them harps, and golden vials full of odours, which are the prayers of saints. 9 And they sung a new song, saying, Thou art worthy to take the book, and to open the seals thereof: for thou wast slain, and hast redeemed us to God by thy blood out of every kindred, and tongue, and people, and nation; 10 And hast made us unto our God kings and priests: and we shall reign on the earth.”  (Revelation 5:8-10) “And when he had opened the fifth seal, I saw under the altar the souls of them that were slain for the word of God, and for the testimony which they held:” (Revelation 6:9)

Many are persecuted today. It is the holy desire of the Voice of Christians ministries to provide support for those who are being persecuted this very hour. Prayer support is needed this moment, this day. They are suffering…, will you pray? Will the prayers of the saints worldwide, cause those imprisoned to rise up and sing in the night? Will the jail cells be supernaturally opened as the grace of God allows them to sing in the night seasons of their life? If their calling is to go to the flames like John Huss, will they go singing because the prayers of the saints support them with their humble prayers for grace and faith.

There is also a great need for financial support for court cases, medical needs, basic necessities for fleeing refugees who are being persecuted as they flee the war torn areas that were once their homes. Money, homes, shelters, individual families that are willing to provide a place of safety, and time to recover for those who are being persecuted. How many of you would be willing to give to provide a temporary sanctuary? Some could give small amounts. Some could give very large amounts.

Jesus said: “…, The harvest truly is great, but the labourers are few: pray ye therefore the Lord of the harvest, that he would send forth labourers into his harvest.”  (Luke 10:2)

What is the calling of God upon your life? To trust HIM, to honor HIM, to worship HIM in spirit and in truth. We do this when the sun shines. We do this when the moon is hidden by the darkness, and we see no light. HE sees the beginning from the end in each one of our lives. HE knows and HE thinks upon HIS own. This we know it is the humble who are heirs of the kingdom, and it is the humble who shall be greatest in the kingdom. The promise is given to the poor in spirit.