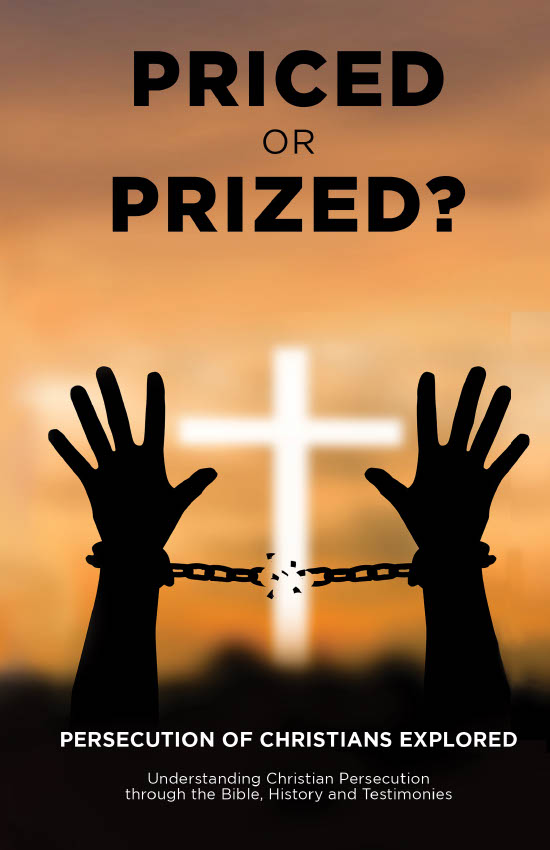 Click on the link to read in your browser as flip book; Read

With the rise in contemporary liberalism and advancement in technology, significant transformations have been brought to social and political structures that have made the lives of humans relatively easier. Although the immediate achievement of complete peace and harmony in society is still a far fetched idea, the campaigns against major social issues such as economic disparities, racism, and other forms of inequality can be seen as a glimmer of hope. Yet, despite the extensive political discourse and movements, there is merely a nodding acknowledgement of the prevailing human rights issue: the persecution and intimidation of religious minorities.

Among these minorities, Christians are the most persecuted religious group in the world today. According to the World Watch List 2020, an annual report on the global persecution of Christians, there are 50 countries where believers are facing extreme levels of persecution for their faith.1 From their church and community life to their private and family life, they are facing consequences simply for being a Christian. They are being discriminated against, attacked, harassed, falsely accused, imprisoned, and even brutally murdered.

Tragically, this violent oppression is not acknowledged by the media and many cases of mass brutalities against Christians go unreported. Journalist John Allen writes in his book, The Global War on Christians: Dispatches fromthe Front Lines of Anti-Christian Persecution, about how there is “a rising tide of legal oppression, social harassment, and direct physical violence, with Christians as its leading victims. However counter intuitive it may seem in light of popular stereotypes of Christianity as a powerful and sometimes oppressive social force, Christians today indisputably are the most persecuted religious body on the planet, and too often their new martyrs suffer in silence.”

These spine-chilling stories of the oppressed beg to be told. Their silenced voices hope to find justice one day, and each one of us has a role to play in their story. With our assistance, we can bring the stories of the oppressed to the forefront. Therefore, it is vital to thoroughly understand the notion of persecution and how it systematically governs the lives of believers, and to analyze the various spheres of life where persecution takes place and learn about the different ways in which violence is exerted.

Webster defines persecution as “the act or practice of persecuting; especially those who differ in origin, religion, or social outlook.”2 However, even though the first records of the word in the English language come from the 1300s, the word originates from the Latin persecūtor, which literally means “pursuer” and from the verb persequī which means “to prosecute, to pursue closely” or “to take vengeance upon.”3 The Hebrew word radap and the Greek word dioko used in the Bible also mean “to pursue, to put to flight or to chase after”.4 All in all, the connotations of these words can be extended to describe oppression, affliction or harassment.

perpetrated by the Roman Empire. These atrocities further increased as different emperors exercised their rule to limit the spread of Christianity by legalizing new religions. During these times, Christian missionaries set out to preach the word of God but were mercilessly tortured and killed. Eventually, as Christianity spread, there was a spike in Christian denominations which gave rise to the oppression and soon the geographic spread of Christianity also threatened other religious and political authorities which resulted in Christian persecution at genocidal levels.

Today, religious persecution is taking a different shape and form depending on the society. While on the one hand, surveillance states are monitoring the religious practices of Christians, on the other hand, believers living in underdeveloped countries are struggling to acquire their fundamental rights. Despite the remarkable spread of Christianity over the years, the Church of God still teems with paranoia due to the injustice and cruelty that does not seem to end.

THE MANY FACES OF PERSECUTION

Persecution is more commonly categorized as physical violence, discrimination and hostility, but these are not the only ways in which oppression takes place. There are many types of persecution that happen in various spheres of human life, and these often tend to go unnoticed because of their lack of severity. The ignorance of these seemingly subtle signs of persecution then gives rise to bigger conflicts and atrocities that eventually become difficult to control. Therefore, let’s take a look at some of the ways in which persecution is exercised so that we can recognize it more clearly.

Ostracism is the act of excluding someone from a society or group. This is a common practice that dates back to the Jewish times where any person who broke the law was abandoned and thrown into exile. This was often followed by punishment, humiliation and sometimes permanent separation from their clan. This form of mistreatment is still common in families or religious communities today. Christian converts have to face severe punishment by their loved ones and are often disowned. In some cases, believers have to escape for fear of being killed.

In many countries, political authorities use faith as a tactic of manipulation. For instance, the Communist government uses people to spy on Christians or other minorities, and they are forced to incorporate another religion into their own practices. Believers are forced to attend festivals and participate in activities that do not align with their own beliefs. Even in Islamic states, most educational institutes teach Islamic values and beliefs to children of all religions, depriving them of the freedom to study their own religion.

Islamist, Communist and Hindu states often politicize their religion in order to tackle a threat from another growing religion. Maj Gen Tim Cross, a former British Army officer and practicing Christian, highlights that most religious conflicts are about power and identity. He says, “Fear generally drives conflict, and in an increasingly globalized world, hundreds of millions of people want to know who they are, and a religious identity very often provides that. Those who take on a different identity are seen as threatening.”5 Thus, the spread and adoption of Christianity threatens these religious groups and they politicize their religion.

As a consequence, church groups are denied permission to run charities or religious programs, Christians are not allowed to work in their field of choice, they are deprived of basic resources, and their voices are silenced when they cry out for justice.

Discrimination and Bullying at Work or School

Discrimination is not just limited to political or economic affairs but goes deeper into the professional sphere of life. Christians have to face challenges of unemployment and poverty because of the lack of job opportunities. They are often looked down upon, openly humiliated, and unwelcomed in certain places. Children also face bullying at school by the administration or peers. They are singled out or mocked for their beliefs and are often forced to go against their religious values.

Freedom of thought, expression, belief and a safe environment to live in are essential for us to thrive as humans. However, Christians are denied these basic rights and are silenced if they try to voice their opinions. They are falsely accused and imprisoned for blasphemy. Churches are burned down or bombed, church leaders are threatened or killed, and racial and religious hatred is incited to create disturbances for the believers.

These deceptive and subtle ways of persecution may at first seem harmless, but they are doorways to outright hatred and barbarism towards the Church. There are many parts of the world where believers are paying the price for their faith and are struggling to find relief from the oppression. Despite that, victimization of Christians remains an unpopular subject that is actively ignored, and as a result, harrowing stories of persecuted believers continue to be swept under the rug.