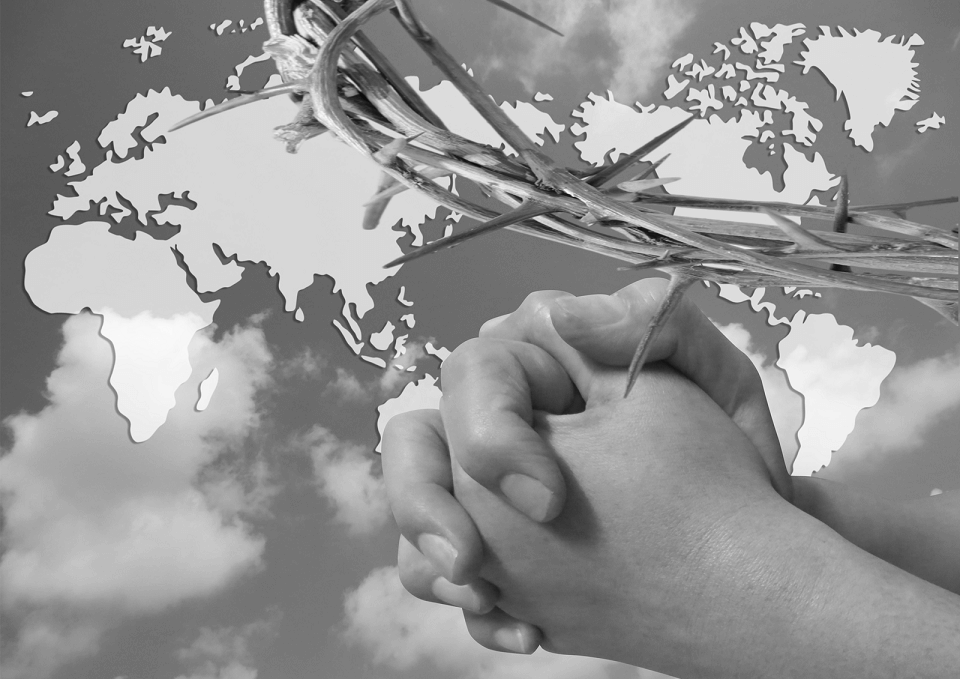 The persecution of believers around the world is estimated to be one out every seven Christians. To flesh out that number in relatable terms this percentage of the world’s population would represent the entire population of the United States. The Bible reveals two aspects to the idea of the body of Christ. The local assembly by which and through which the purposes of God are manifested to the world of men. Then secondly, the complete collection of believers worldwide. This body will meet at a future time, but until then we are united by the person of Jesus Christ. HIS Spirit fills us, teaches us, guides us to function in the world to take the message of God to those that are separated from HIM by their sin. Prayer is a ministry the body of Christ may participate with no purpose other than to love those in need. In the book of Acts chapter 10, we see recorded the giving of alms and prayers  by one Cornelius.

“And when he looked on him, he was afraid, and said, What is it, Lord? And he said unto him, Thy prayers and thine alms are come up for a memorial before God.” (Acts 10:4) The actions and prayers of the man who feared God are heard. The result of those prayers was that Peter came and preached to the Gentiles in Joppa and many were saved and baptized. If a man, a family, a community, a nation is in need, the prayers of God’s people may intercede and those prayers become an aroma unto God. HE will hear and HE will answer according to HIS wisdom and the riches of HIS grace. We know God is moving in powerful ways throughout Ukraine as testimonies of the love of God are being reported throughout the region. These are answers to the prayers of God’s people in Ukraine and those praying around the world for this nation now being devastated by the Russian war machine.

In 1991 Ukraine was freed from the Soviet Union and they have since moved from a godless communist state to a nation that prepares pastors and missionaries for the Ukraine as well as sending ministers into Eastern Europe. This Ukrainian Baptist group as well as many other denominational groups are continuing to serve the people and the growing number of refugees of this area.

“The All-Ukrainian Union of Evangelical Baptist Churches, the largest Protestant community in Ukraine, reports among its ranks 2,272 churches, 320 missionary groups, and 113,000 adult believers.

Many of these believers are mobilizing. Bandura explained that plans are underway to turn church basements into refugee centers, as they stock up on supplies. Members with medical backgrounds are readying for service.” 1

Another example comes from ABWE International as reported in Christianity Today 2/9/2022 from the article: In Ukraine, Mission Work Goes on During Russia Standoff by Rachel Pfeiffer

“I know what it means to be persecuted, Khmyz said. When freedom came to Ukraine, many things completely changed. The number of churches started to grow very fast. Many new Christians dedicated themselves to Jesus, and they wanted to grow, to serve, and to proclaim the gospel.”

Khmyz described how the Communist regime tried to destroy Christian theology. Since Ukraine gained its independence in 1991, nationals, missionaries, and foreign ministry organizations have established seminaries and discipleship programs to help believers and develop church leaders.

Ukraine is the main missionary-sending country for Eastern Europe and Central Asia, said Tokar. The church is very strong. As far as Europe is concerned, the Ukrainian church is perhaps the strongest and is doing the most for education, training, and sending out workers.”

Ukraine has become a force to take the gospel locally and also to take the gospel to Eastern Europe. This is but a small sample of the faithful working of God through HIS people as they respond to the needs of the hour during the Russian invasion into Ukraine. God moves in answer to prayer and people pray when the enemy moves against the people of God.

With the church growing in Ukraine, by sending out missionaries to the surrounding nations, and disciples developing preparing themselves for ministry, it is no wonder the principalities and powers of darkness have chosen to move upon this country to create chaos. These ministries must continue to be supported by prayer. The prayers of God’s people must intensify and not diminish. Consider the following record of prayers presented to God in the book of the Revelation of Jesus Christ.

“And another angel came and stood at the altar, having a golden censer; and there was given unto him much incense, that he should offer it with the prayers of all saints upon the golden altar which was before the throne. 4 And the smoke of the incense, which came with the prayers of the saints, ascended up before God out of the angel’s hand. 5 And the angel took the censer, and filled it with fire of the altar, and cast it into the earth: and there were voices, and thunderings, and lightnings, and an earthquake.” (Revelation 8:3-5)

How then should we pray? One of my favorite prayers to pray for myself, family, friends and now persecuted believers around the world, is found in Ephesians chapter 1.

“That the God of our Lord Jesus Christ, the Father of glory, may give unto you the spirit of wisdom and revelation in the knowledge of him: 18 The eyes of your understanding being enlightened; that ye may know what is the hope of his calling, and what the riches of the glory of his inheritance in the saints, 19 And what is the exceeding greatness of his power to us-ward who believe, according to the working of his mighty power,”  (Ephesians 1:17-19)

Stand, walk, or kneel before God reading the Scriptures out loud, crying to the God of heaven who sees their persecutions, their imprisonments, the fear of the hearts. Oh, beloved brother and friend IN CHRIST, “…God hath not given us the spirit of fear; but of power, and of love, and of a sound mind.” (2 Timothy 1:7) But what if fear is present in the persecuted? They have a need that we may meet through our faithful prayers for them. Cornelius gave alms and he prayed. What shall we do?